“We were really BORING!”- were the cryptic and funny message put across by reality TV star and former housemate of BBNaija sammie as he compares his set to that of his previous set.

This funny disclosure were made known by sammie as he places a comparison between his 2021 set and the current ‘Level
Up’ housemates.

The reality TV star who also happens to be a filmmaker took to his official Twitter handle to share his outcry as to how himself alongside were truly boring during their own edition of the show.

According to his opinion, just three days into the new edition of the reality TV show, he is already feeling the liveliness on the show airing on national and international television.

In his tweet, he noted ”Lol we were really BORING!” a tweet which has Noe been deleted having received a whole lot of backlash from a large portion of the viewers. 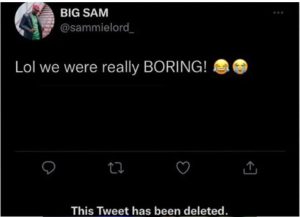