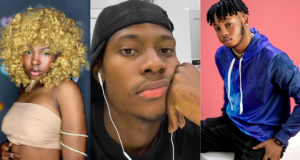 In a viral Tiktok video which had surfaced the Internet as regards to the various insults being traded by Tiktok stars in the persons of Rina and Carter Efe regards to the relationship affair of social media influencers as well as Tiktok star Khloe and Bernie.

In the aftermath of their relationship coming to an halt, a video was made by the tiktok star, Khloe giving an inside view as regards to their relationship status on Tiktok, which went viral on a whole lot of social media outlet.

Rina actually got herself involved in an heated argument with Bernie of which her followers and fans on Tiktok expressed their disgust and displeasure in such display of acts by the tiktok acclaimed celebrities in the persons of Rina and Khloe.

Just as we aforementioned earlier in this post, the reason for their separation still remains undisclosed at this present moment, even though both Rina and Bernie had publicly come out to announce to their fans that they are now In good terms with one another abd had finally settled their rift.

Even with that known fact being present, a Tiktok live video were put across by Rina and Carter of which they could be clearly seen and heard insulting and blackmailing Khloe. Such an act displayed was not taken lightly by the fans of Khloe as they insulted Carter for making that statement.

In the so called video, Carter asked Rina if he had a look of the private pictures of Khloe of which Rina was laughing hysterically rather than asking Carter to stop it.