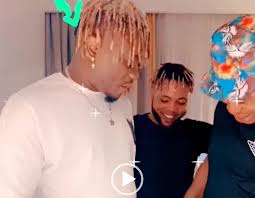 A video of a Nigerian man with an undisclosed name has surfaced online after he was poisoned by his close friends on his birthday.

It was gathered that his ‘close’ friends came to merry with him on this joyous occasion, unknown to him they had other plans for him.

He was rushed to the hospital by some good samaritan, but it was too late as he died hours later.

This video has moved alot of people to tears, and his family is seeking for justice.

Unical SUG President Girlfriend Ask a Malabress to Kneel Down