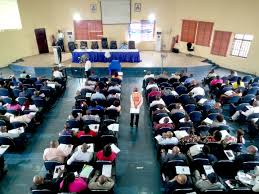 Unical Mop up Exams for those who could not graduate from 1975: a Fares.

The attention of Management has been drawn to another write up in the social Media titled “Unical Mop up Exams for those who could not graduate from 1975”. The aforesaid piece of writing quoted the Vice Chancellor Florence Banku Obi, as directed that a mop up exams be given to students who could not graduate from the institution owing to result issues as far back as 1975 when the university officially came into existence.

We do not know the originator of this information that is obviously a farce. Perhaps it may be coming from one of those who in the past have originated similar information to create confusion and mayhem.

It may also be the devious scheme of perhaps one who had issues with results and left without graduating.

Let it however be stated that at no time did the Vice Chancellor gave such a directive as truly as magnanimous as the mischief makers claim she is. The information is false and has no bearing with the University of Calabar. Students with results issues are armed with sufficient information on where to go to, who to meet and the procedures to follow.

Members of the University Community and the general public are requested to discountenance and discard the false information since it is the work of mischief makers.