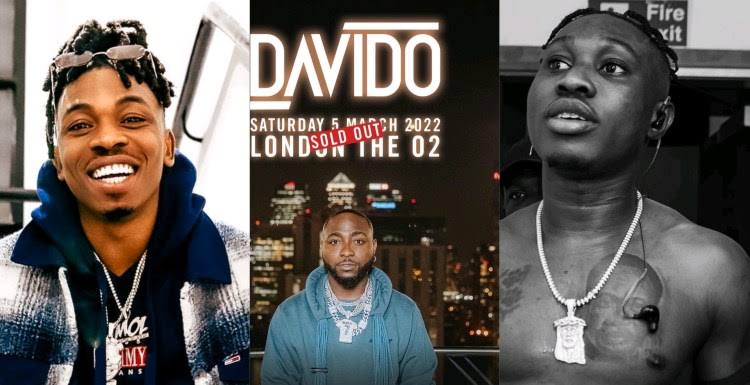 Mayorkun, Victor AD, May D, Damibliz, Focalistic, Perruzi and many more at 02 Arena

Davido is one of the most famous Afro-pop and R&B artists in the world. He is a Nigerian singer, songwriter, record producer and performer. His concert at the 02 Arena l on 5th of March, 2022 was epic, it has been said that he had the most fans and music lovers at his concert. He made history again by bringing an artist to perform, which is the first time a musician from the country will perform live at the arena. This article will discuss the biggest artists that performed at Davido’s 02 Arena this year.

The concert venue has over 20,000 capacity and people from different continents traveled to London to see their favorite artists perform. The tickets are sold out, l even before the day of the concert.

Top Artists that Performed at Davido’s 02 Arena in London

Mayorkun, also known as the Mayor of Lagos, shut down the show with one of his hit songs “Holy father” at the 02 arena. He is one of the most promising artists and has a lot of potential in the music industry. He came on stage at the end of the first session of the concert immediately after Davido’s performance and his performance was amazing and he definitely gave the audience a treat that night. In addition to Holy father, he also performed Mama, Bobo and Che che among others.

Peruzzi also graced the concert and gave the crowd a good show. His performance was outstanding throughout the evening and he was very entertaining. He performed some of his hit songs like Aje, ECool is for you, Amaka alongside Davido, 2face Idibia and Yonda. He gave the audience a good performance and definitely left the audience wanting for more of his music. Immediately after the Amaka performance with 2Face Idibia, the audience gave a standing ovation which definitely showed how much they loved their performance.

Victor AD is another sensational artist. His popular song “Wetin we gain” was one of the most played songs on the radio at that time and a lot of people were familiar with his music. He stormed the stage with Davido to perform the hit track again and their performance was amazing and the audience loved it.

Mr May D also performed alongside Davido. His performance was perfect and he definitely gave the crowd a good performance. He performed the remix of his hit track “”Chop My Money” and the crowd could not just stop singing and vibing the song. They loved the performance and would definitely want more of his music.

This is another promising artist that performed at the concert based in London. Davido allowed him to come on stage and performed his popular hit song “Jowabayi”. The crowd loved it and the performance was very good and very entertaining. Top stars like Naira Marley, CDQ and Mystro also joined him on the stage and gave the international audience an experience they would not forget in a hurry.

The famous South African rapper, Lethabo Sebetso, professionally known as Focalistic, also made one of the major appearances at Davido’s concert. He stormed the stage and performed the hit song “Champion Sound”. He was also joined by Davido and the crowd was very excited at the closing performance by the duo.

This year’s concert was amazing, it has been said that Davido is one of the best artists in the music industry. His performance was wonderful and he made history by securing South African artists to perform at the 02 Arena London this year.