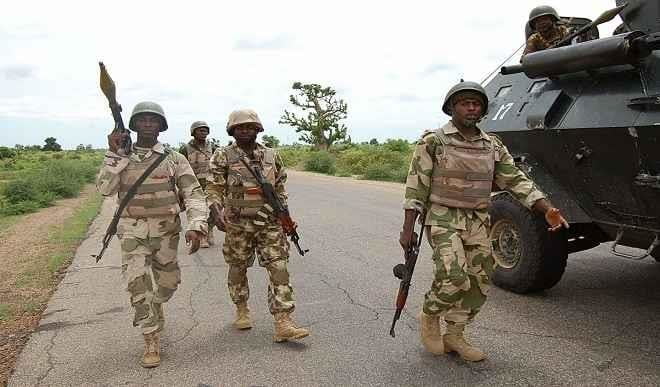 The Nigerian Army has denied reports that its personnel has killed about 70 innocent persons in recent raids in Benue State.

The spokesperson for the Nigerian Army, Brig General Mohammad Yerima in a reaction on Friday to the allegation that soldiers have killed several innocent civilians in Mbator, Shangev-Tiev of Konshisha Local Government Area of Benue d3scribed the allegation as untrue.

He added that contrary to the allegation, the on-going operation in Benue State is to fish out hoodlums who attacked and killed eleven Army personnel, including one officer and ten soldiers.

It would be recalled as earlier published by Naija News that the people of Mbator in Shangev-Tiev of Konshisha Local Government Area of Benue State have accused Nigerian soldiers of killing at least 70 innocent persons.

Bonta village of Mbator in Shangev-Tiev of Konshisha LGA and the Okpute-Ainu in Oju LGA have experienced several decades of land tussle with renewed hostility breaking out between both communities five days ago which led to the deployment of troops.

Speaking on Friday during a press conference in Makurdi, Benue, a group known as Shangev-Tiev Assembly (STA), accused the military of ravaging at least 15 other communities, destroying schools and hospitals in the process.

Reacting to the allegation, Army Spokesperson noted that the soldiers are only in Benue to fish out the alleged killers of 11 Army personnel.

He also mocked the suspected hoodlums for being afraid to get killed after they had killed others without mercy.

In his words, Yerima was quoted to have said: “We are not killing people in Benue State. They know how to kill people and they are afraid not to be killed.

“We are not killing anybody, all we are doing is searching for the people that killed the soldiers and we will find the people.

“Whoever said we are killing people and destroying properties is telling lies. The report on the internet about soldiers killing people in Benue is false. We are searching for those who killed the 11 soldiers, that’s all we are doing”.

Meanwhile, the Governor of Benue State, Samuel Ortom, has called on residents of Konshisha community to return the weapons of the military without further delay.

Ortom in a statement released on Friday charged the military as well as other parties to the ongoing crisis in the area to restrain themselves.