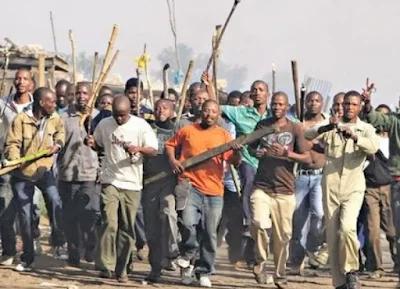 Chaos in the city of owerri as Hoodlums storms Imo state beheading two persons in Orsu LGA of the state.

The Hoodlums who were armed, also set the house of the lawmaker representing the state House of Assembly, Ekene  Nnodimele immediately after beheading his gate man.

The hoodlums alongside beheaded The APC Chieftain in the area, the person of Jonathan Ugochukwu.

The villagers disclosed that the incident took place around 1am and 2am  in the middle of the night.

Correspondent, who visited the area on Wednesday morning, observed that the country home of the immediate past state attorney general of the state and commissioner for justice, Cyprian Akaolisa, was also burnt.

The team of policemen came around to inspect the building.

Meanwhile, the hoodlums burnt the house and vehicle of the councilor representing Amaebu Ebenatu ward, Clifford Mazi since they couldn’t get him at home at the time of the operation.

The house of the President General of Amaebu Ebenatu, Oliver Ejelonu was also burnt down since he escaped.

The wife of one of the victims, Nkechi Ugochukwu, told our correspondent that the attackers invaded their house, carried her husband out, beheaded him and set the house ablaze.

When contacted, the immediate-past attorney general and commissioner for justice, said that he had reported the arson to the police.

The state commissioner of police, Abutu Yaro, said that the police were investigating the multiple attacks.

He, however, disclosed that his command was closing in on the attackers.