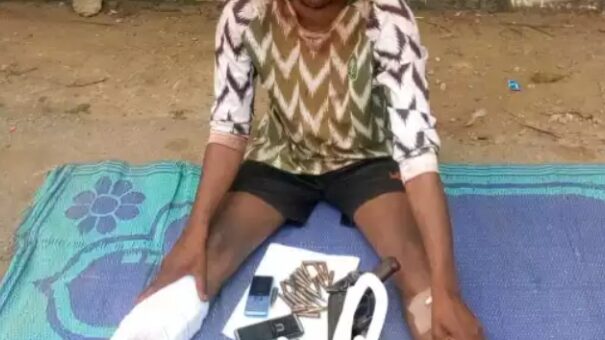 A Lecturer working in Jos University under the department of social sciences education, Dr. Kennedy Nandi Drenkat was shot to instant death by unknown Gunmen in his residential house in Bauchi Road, Off the Senior staff quarters on Friday midnight.

Prior to the shocking news, the commissioner of police with immediate effect ordered that his men go out to make sure that the killer is fish out and Arrested.

The State Commissioner of Police Edward Egbuka, while addressing newsmen on the incident, said the Police Command on Saturday, received a distress call at road 6 University Senior staff quarters, Jos where some gunmen entered the house of one Dr. Nandi Drenkat a lecturer with the University of Jos where he was shot dead and his six years old daughter was also abducted.

On getting there, his men got the order, immediately took into actions and decided to chase after a very notorious armed Robbers which they finally caught him.

Ali Mohammed of Narabi who was the prime suspect was shot on his right leg and was arrested with one AK 47 rifle with breach Number 1984/AP 0240, 29 rounds of live ammunition was also gotten from him. A kidnapped victim name Chiboze Joseph was rescued unhurt while other kidnappers and robbers escaped with bullets wounds.

He was subjected into serious interrogations and he confessed and accepted the crime telling the police that he single handedly killed the university lecturer, he added that he was a student of the institution and he has killed two of his lectures who were problem to him.

The police commissioner who confirmed the arrest told newsmen that the suspect was been taken to the hospital for treatment because of the bullets wounds he got while exchanging bullets with his men, he will be charged to court once investigations are concluded