A former BBNaija winner, Mercy Eke has clapped back at a troll who mocked her over her Igbo accent.

According to the winner of the Big Brother Naija show (season 4), Mercy Eke, she rolls with millionaires.

This comes as the reality star has been under constant attack from trolls because of her Igbo accent.

Man Arrested For Procuring Abortion For His Girlfriend In Lagos

However, the verbal battle ensued after a fan extolled and admired Mercy due to her beautiful looks and a lady reacted saying that the reality star is beautiful till she opens her mouth to speak.

In response to this, Mercy told the lady that she opens her mouth to speak with millionaires on how to make billions.

See the exchange below: 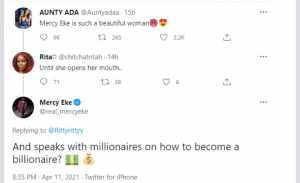