Who is Evander Kane?

Canadian professional ice hockey left winger “Evander Kane” was born to the family of Sheri Kane and Perry, on August 2, 1991, in Vancouver, British Columbia. He plays ice Hockey for San Jose Sharks of the National Hockey League (NHL) as his career.

Kane was named after Evander Holyfield, American boxer, who he met specifically around 2009 when he was just eighteen years old.

He won  the Memorial Cup when he was with the  Vancouver Giants of the Western Hockey League (WHL) in 2007, during his major junior profession  tagged Junior Ice Hockey, he also had to his name the fourth overall in the first round of the 2009 NHL Entry Draft by the Atlanta Thrashers.

READ  10 Mineral resources in Nigeria and their Locations

Hockey Player got married to Anna Kane,who had a miscarriage at 26 weeks, a daughter they named Eva Kane. After 18 months, Evander Kane and his wife, Anna lost their supposed first child, which they later gave birth to another child they called Kensington Ava Kane.

To announce the arrival of his baby girl, Evander Kane writes a short but emotional message to his daughter, which reads: 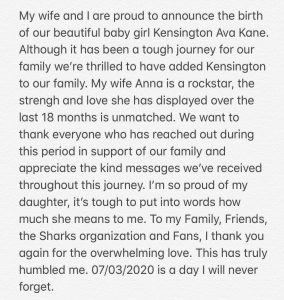 “My wife and I are proud to announce the birth of our beautiful girl Kensington Ava Kane. Although it has been a tough journey for our family we’re thrilled to have added Kemsington to our family. My wife Anna is a rockstar, the strength and love she displayed over the last 18 months is unmatched. We want to thank everyone who has reached out during this period in support of our family and appreciate the kind messages we’ve received throughout this journey. I’m so proud of my daughter, it’s tough to put into words how much she means to me. To my family, friends, the Shark organisation and fans, I thank you again for the overwhelming love. This has truly humbled me. 07/03/2020 is a day I will never forget”.

READ  List of Courses Offered by University of Calabar (UNICAL)