Home » Bbnaija » BBnaija 2022: “How she repaid me for the help I rendered to her” BBNaija’s Chichi gets exposed

“How she repaid me for the help I rendered to her” were the outrage of an anonymous lady as she lashes out on recently unveiled BBNaija’s Chichi.

The anonymous lady who has been alleged to be Chichi ex-best friend and goes by the username Brown Sugar has called out Chichi on wanting to take her life by poisoning her.

In her recent disclosure, she quickly briefed as to how Chi-Chi goes about bringing several Turkish men to her hotel room for a nightstand.

In her words, “This idiot was my best friend my sister everything but she wanted to take my life to the extent of poisoning me. I helped this girl pay rent, and buy food”

“She reached out to me on Instagram that she wants to kill herself and that she is suffering I took her in and helped her stupid life even when she was using my house as a hotel to bring Turkish men and fuck them idiot I hate you with my life”. She posted. 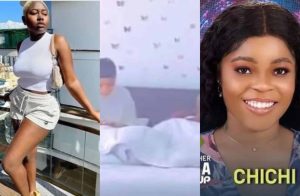 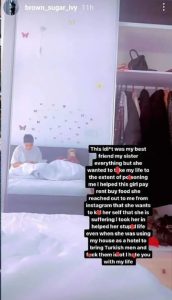