A Nigerian man residing in Lagos has been arrested after his nine year old daughter recounted how he consistently raped her for a long time.

In a video shared online by @mibi.oje, the little girl, Esther, said her father had consistently raped as her stomach was beginning to hurt her. She recounted how he would ask her to remove her clothes and then insert his male organ into her and afterwards ask her never to tell anyone.

His evil deed came to light when Esther mentioned it in school.

A statement from the Lagos state Domestic and Sexual Violence Response Team DSVRT says the father has been arrested while the victim has been taken into protective custody. 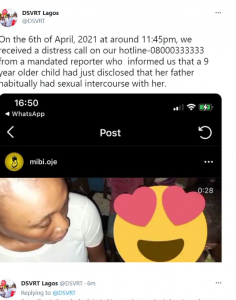